Amaravati is a Theravada Buddhist monastery situated at the eastern end of the Chiltern Hills in south-east England. It is near the Hertfordshire village of Great Gaddesden. The nearest towns are Hemel Hempstead and Berkhamsted.

Established in the early 1980s, the monastery is inspired by the Thai Forest Tradition and the teachings of the late Ajahn Chah, a Thai monk and renowned Dhamma teacher, who encouraged Ajahn Sumedho to settle in England and found monasteries in this country. In Autumn 2010 Ajahn Sumedho handed over the position of abbot to the English monk Ajahn Amaro, for the previous fourteen years co-abbot of Abhayagiri Buddhist Monastery in Redwood Valley, California.

The purpose of Amaravati Monastery is to provide a place of practice for monastics in the Forest Tradition, whose shared intention is the realization of Nibbana, freedom from all mental suffering. It is also open to guests and visitors who wish to come and stay in a place where there is the opportunity to develop mindfulness, to explore spiritual teachings, and to contribute to the life of the community.

The community consists of monks and nuns, together with a number of full-time lay residents. Usually there are between twenty and thirty bhikkhus (monks) and siladhara (nuns) in residence, living a contemplative, celibate, mendicant life according to the Vinaya (monastic training rules) and Dhamma (the Buddha’s teachings). The community also includes anagarikas, who wear white, observing the Eight Precepts, and who have made a commitment to train within the monastic community for at least a year and may subsequently make a further commitment to the monastic training. The monastery also includes within it an retreat centre, where residential retreats are conducted for the public during nine months of each year. 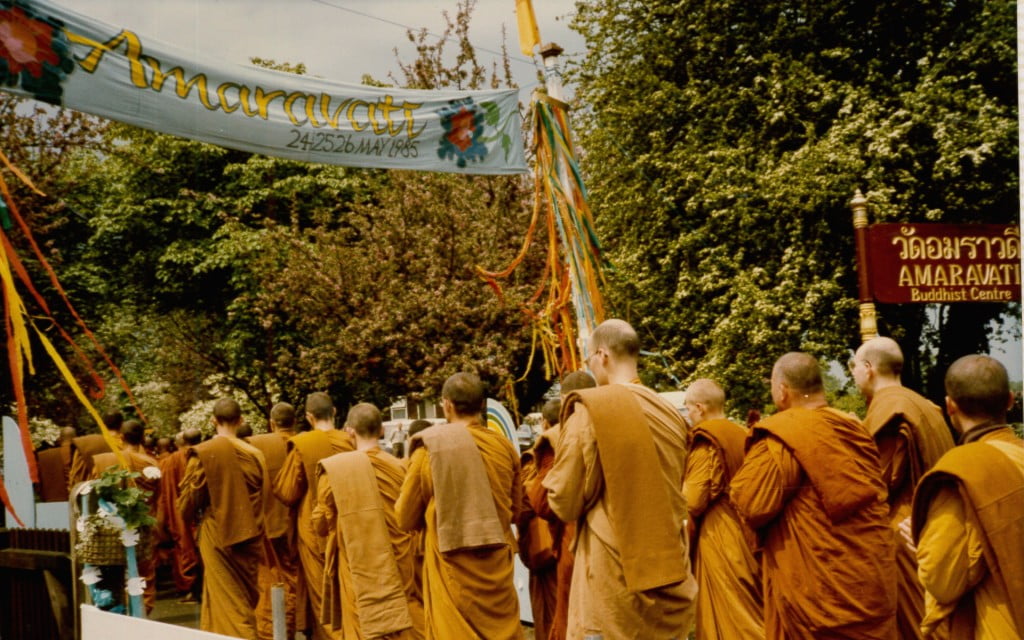 The Sangha formally opened Amaravati in 1985

Amaravati opened formally in 1985, after the English Sangha Trust had purchased the site from Bedfordshire County Council. It had formerly been a residential school and consisted of several large huts in Canadian cedar, built by the Canadian Air Force before World War II.

A purpose-built temple was officially opened on 4 July 1999 by Princess Galyani Vadhana, sister of the King of Thailand.

In accordance with the tradition established by the Buddha whereby for more than two millennia the monastic community has relied for its material well-being on unsolicited offerings of food and other requisites from the lay community, both the monastery and its retreat centre are run entirely on donations from members of the public.