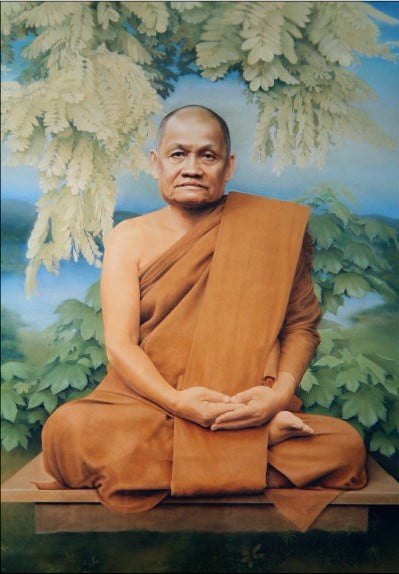 Ajahn Chah was born in a village in Ubon Province, North-East Thailand. At the age of nine he went to live in the local monastery. He was ordained as a novice, and at the age of twenty took higher ordination. He studied basic Dhamma, the Discipline and other scriptures, and later became a wandering tudong1 bhikkhu. He travelled for a number of years in the style of an ascetic bhikkhu, sleeping in forests, caves and cremation grounds, and spent a short but enlightening period with Ajahn Mun himself.

In 1954 he was invited to settle in a forest near Bahn Gor, the village of his birth. The forest was uninhabited and known as a place of cobras, tigers and ghosts. More and more bhikkhus, nuns and lay-people came to hear his teachings and stay on to practise with him, and as time went by, a large monastery formed and was given the name Wat Pah Pong. There are now disciples of Ajahn Chah living, practising meditation and teaching in more than 300 mountain and forest branch monasteries throughout Thailand and the West.

Although Ajahn Chah passed away in 1992, the training that he established is still carried on at Wat Pah Pong and its branches. There is usually group meditation twice a day and sometimes a talk by the senior teacher, but the heart of the meditation is the way of life. The monastics do manual work, dye and sew their own robes, make most of their own requisites and keep the monastery buildings and grounds in immaculate shape. They live extremely simply, following the ascetic precepts of eating once a day from the alms bowl and limiting their possessions and robes. Scattered throughout the forest are individual huts where bhikkhus and nuns live and meditate in solitude, and where they practise walking meditation on cleared paths under the trees.

In some of the monasteries in the West, and a few in Thailand, the physical location of the centre dictates that there might be some small variations to this style – for instance, the monastery in Switzerland is situated in a old wooden hotel building at the edge of a mountain village – however, regardless of such differences, the same spirit of simplicity, quietude and scrupulosity sets the abiding tone. Discipline is maintained and practice to continue. Indeed, not only has this practice of wandering on foot been maintained by Ajahn Chah, his disciples and many other forest monastics in Thailand; it has also been sustained by his monks and nuns in many countries of the West. In these situations the strict standards of conduct are still maintained: living only on almsfood freely offered by local people, eating only between dawn and noon, not carrying or using money, sleeping wherever shelter can be found. Wisdom is a way of living and being, and Ajahn Chah endeavoured to preserve the simple monastic life-style in all its dimensions, in order that people may study and practise Dhamma in the present day.

From the beginning Ajahn Chah chose not to give any special treatment to the farang (Western) monks who came to study with him, but to let them adapt to the climate, food and culture as best they could, and use the experience of discomfort for the development of wisdom and patient endurance.

“In 1975 Wat Pah Nanachat (the International Forest Monastery) was established near Wat Pah Pong as a place for Westerners to practise. The people of Bung Wai village had been long-standing disciples of Ajahn Chah and asked him if the foreign monks could settle there and start a new monastery. Then in 1976 Ajahn Sumedho was invited by a group in London to come and establish a Theravādan monastery in England. Ajahn Chah came over the following year and left Ajahn Sumedho and a small group of monastics at the Hampstead Buddhist Vihāra, a town house on a busy street in North London. Within a few years they had moved to the country and several different branch monasteries had been established. Other monasteries were set up in France, Australia, New Zealand, Switzerland, Italy, Canada and the U.S.A. Ajahn Chah himself travelled twice to Europe and North America, in 1977 and 1979.

He once said that Buddhism in Thailand was like an old tree that had formerly been vigorous and abundant; now it was so aged that it could only produce a few fruits and they were small and bitter. Buddhism in the West he likened in contrast to a young sapling, full of youthful energy and the potential for growth, but needing proper care and support for its development.