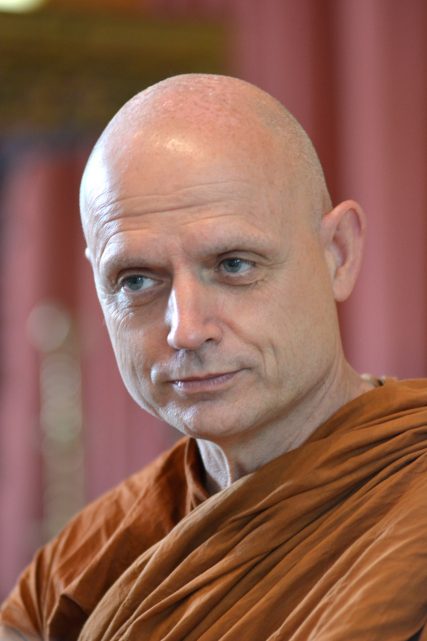 Ajahn Jayasaro (Shaun Michael Chiverton) was born on the Isle of Wight, England in 1958.  He joined Ajahn Sumedho’s community for the Rains Retreat as an anagarika in 1978 and in November he left for Wat Pa Pong in Northeast Thailand where he ordained as a novice in the following year. In 1978 he became a disciple of Ajahn Chah, one of Thailand’s most renowned Buddhist monks and meditation masters, at Wat Pa Pong forest monastery in Northeast Thailand.  He took full ordination, with Ajahn Chah as his preceptor, in 1980.

After his initial five year monastic training Ajahn Jayasaro went on extended solitary retreat before taking on teaching and administrative duties.  Over the next several years he alternated between periods of retreat and service to his monastic lineage.  During this time he was entrusted by the elders of his order with writing the official biography of his teacher, Ajahn Chah.  In 1997 he assumed the position of abbot of Wat Pa Nanachat, the international monastery of Ajahn Chah’s lineage, where he remained until the end of 2002.

Since early 2003 Ajahn Jayasaro has been living in a hermitage at the foot of Khao Yai Mountain National Park. The Dhamma teachings and meditation retreats he gives at regular intervals at a nearby retreat centre offer inspiration to both lay Buddhists and monastics.  He is also a key figure in the movement to integrate Buddhist developmental principles into the Thai education system.  Many of his Dhamma talks are broadcast on radio and television.

Ajahn Jayasaro has written many books on Buddhist themes in the Thai language, a number of which have been translated into other languages, including Chinese, French, Italian and Portuguese. His latest English work, ‘without and within’ is a general introduction to the Theravada Buddhist tradition. In 2011 Ajahn Jayasaro was granted an honorary doctorate in Buddhist pedagogy by Mahachulalongkorn Rajavidyalaya University.