Following on from the Aroga Kuti, it was decided that the next phase of construction (known as Phase 5c and 6a) would cover the nuns’ accommodation and communal buildings.

Accordingly the architect worked with the nuns’ community on an overall design and layout for their area in 2018, followed by detailed drawings for two individual buildings, Amara Kuti and Nissoko. The first buildings are a facility for a senior nun and the Nissoko, a communal building, that will include a meeting space, bowl washing area, offices and a library. These choices reflect the EST’s and Sangha’s interest in providing for the needs of  the elders in the community and the nuns’ need for more adequate  and useable meeting space.

Construction work on these buildings started in April 2019 and is due to be completed by the end of the year. As with Aroga Kuti, these new structures are being being built to Passive House standard, giving low maintenance, highly energy efficient buildings.

Information on how the lay supporters can contribute to the completion of these buildings can be found by clicking the link below:

Summer/Autumn 2017 – The Next Phase of Planning

The Aroga Kuti was finished in time for the 2017 Winter Retreat which meant that the final fixtures and fittings were in place before Luang Por Sumedho came in April 2017 to lead the Open Retreat and attend the International Elders’ Meeting.  He stayed in Aroga Kuti for a month and was pleased with what the community has provided.

You can view a growing selection of pictures of the Aroga Kuti Construction work here.

Also during the winter, the new carpark which many of us will be benefitting from already, was built.  It is for visitors’, guests’, retreatants’ and residents’ cars. By 2018, the soil will have settled in the spaces around the car park so the shrubs that were cut down in order to build it can be replaced.

Phase 5, as it is called, is a bigger phase and includes the service yard by the back gate, part of which is pictured here:

Section of the current Amaravati service yard – a weak wall and an uneven base, a poor incinerator, and a heat hungry, concrete-roofed shower block. Similarly, an inadequate garage in background.

In addition, there are plans for a meeting room and library for the nuns to replace the current temporary building, below, known as Nissoko. It is in poor condition and is not large enough to provide a gathering place for the nuns’ community:

Also, included in Phase 5 is the rebuilding of the Stupa (which is not straight) and the creation of a path around it, to allow for safe circumambulation by candlelight on the three main lunar festival nights of the year, in February, May and July.

All of this will depend on funds being available. Donors have generously come forward to offer significant contributions to the Nissoko building and the path around the stupa, so the EST is able to make tentative steps towards the practical building stage.

From the Drawing Board into the Monastery  – Aroga Kuti (2016)

On January 3 2016 there was a ground breaking ceremony for Aroga Kuti, the first of the buildings to be constructed under the aegis of the long-term plan.

Detailed information about the building’s development and intended use are available by following the link or clicking on the image. There was also a long article published in Looking Ahead in the Autumn of 2015

Building works are due to start on January 11, 2016 and last until October. The inside will then be fully fitted out in time for Luang Por Sumedho’s scheduled visit to Amaravati in May 2017.

Following this, there will be a pause to review the process so far. The next areas due to be considered are the nuns’ area and service yard behind the sālā. 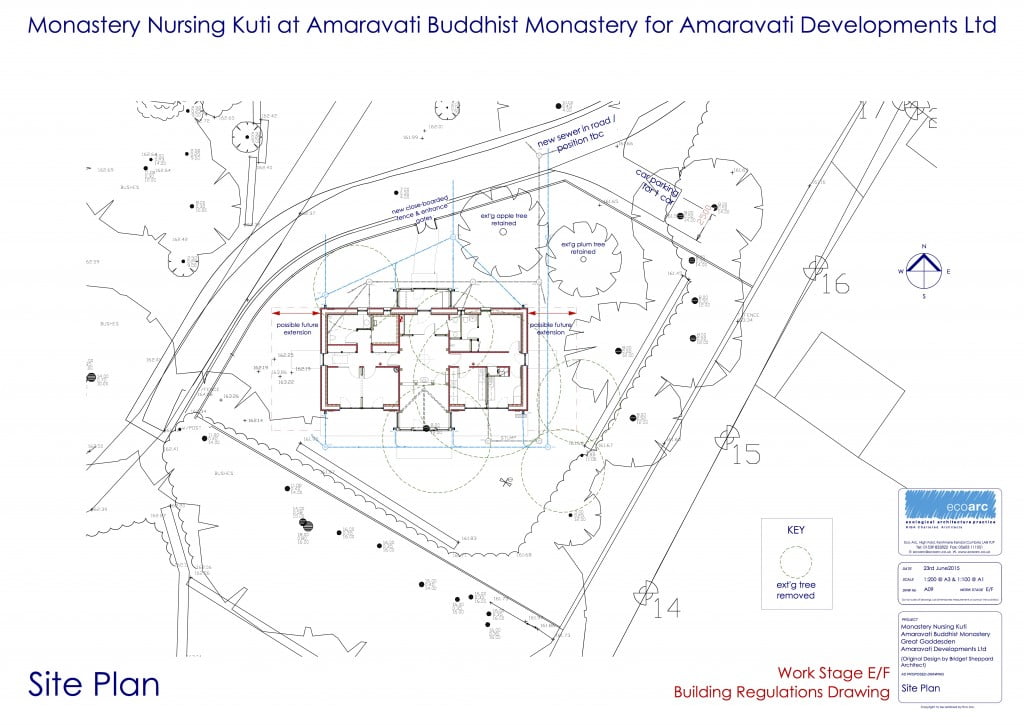 Internal planning and consultation by a dedicated team of people made up of Sangha members, lay residents and experts from outside the monastery started as early as 2011.

The results of that consultation was a long-term plan to redevelop the site. This was made public in spring 2013.

Conceived as a systematic approach to replacing the inefficient original wooden buildings built in 1939 with more sustainable and environmentally friendly structures, it is seen as a long-term project to be implemented in phases over several decades, dependent on funds becoming available.

On Saturday 27th July 2013 the monastery hosted an Open Day for the local community. Among other things, people had the opportunity to view a scale model of the proposed building-plans and display boards explaining the project, shown below. A selection of these boards, along with the model, has been placed on semi-permanent display at the monastery, in the lobby entrance to the Sala.

Ajahn Amaro speaking about the next 30 years of Amaravati

The monastery is closed to visitors from March 24, 2020

Due to the UK lockdown being put in force, the monastery is having to close to visitors until further notice.

Link to video and live stream Dhamma teachings at
https://vimeo.com/amaravativideo

With gratitude for your care and observance.

Powered by Convert Plus